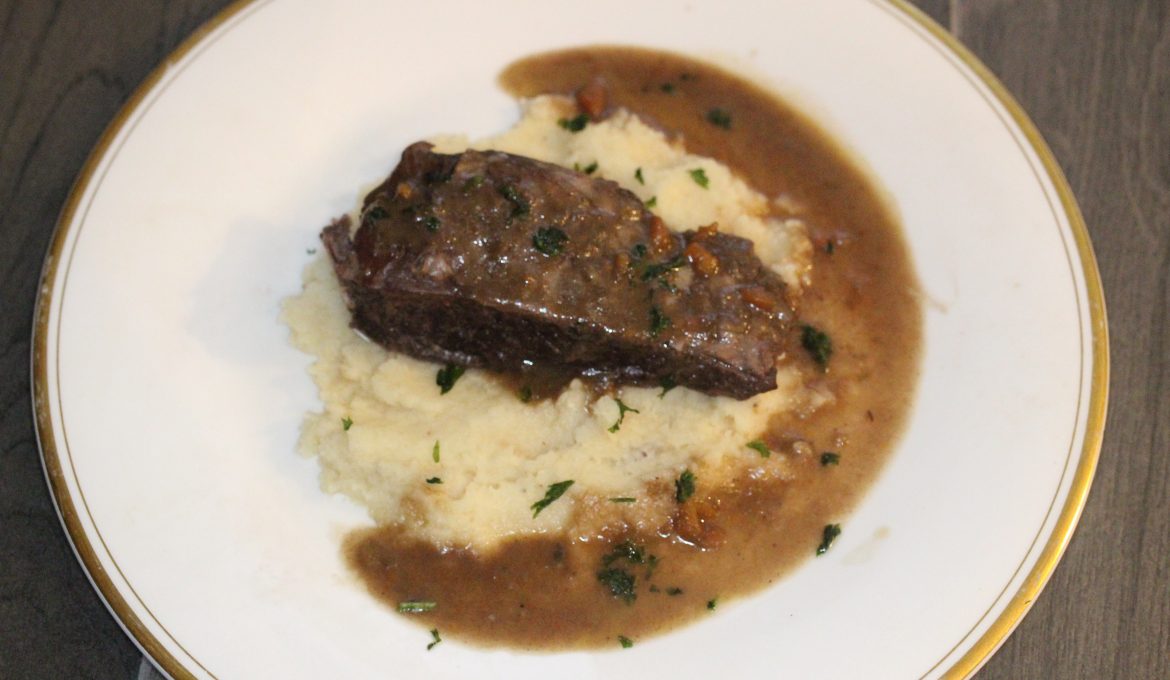 Sophisticated but not complicated – perfect for a special dinner. The slow cooker takes care of most things. To achieve the delicious flavor of the gravy use the best beef broth you can find (Kettle and Fire brand is very good). The celeriac/celery root when pureed is almost the same consistency as firmish mashed potato and with the addition of horseradish complements the beef beautifully. Pour the gravy over the beef and around the bed of puree.

Why use garbanzo/chickpea flour? Usually when making a stew the meat is dipped in flour before searing and this serves to thicken the juices. So I just substituted the garbanzo flour to get the same effect.

2 1/2 pounds of beef short ribs with bones in

1 cup of red wine (I used a Cabernet Sauvignon)

Heat 1 tbsp. oil in a cast iron casserole dish and when sizzling add the onion and let soften and brown slightly before adding the carrot and celery chunks. Cook and stir for a few minutes until they show signs of browning.

Remove vegetables and place on a plate.

Toss the beef ribs in the seasoned garbanzo flour.

Add 1 tbsp. oil to cast iron casserole dish and when sizzling add the short ribs and brown on both sides.

Place ribs, vegetables, stock and broth in the slow cooker (on high heat) and cook for 6 hours. Baste ribs occasionally.

After 6 hours remove ribs from cooker and puree the juices in a food processor. Skim off any fat from the gravy (I use paper towel to do this).

To serve, make a circle of celery root puree on each plate, top with beef and pour some gravy over and around.

Place the celery root chunks in a pan and add boiling water. Bring to the boil then simmer for 10 minutes or so until the celery root is tender. Drain, then process in a food processor along with the oil and horseradish. Season if necessary.

JOANNA ATKINSON
Gluten & Lactose Free Chef
JO’S HEALTHY KITCHEN came into being when I learned that I was both gluten and lactose intolerant later in life. It came as quite a blow – food and cooking have always been very important to me.

Initially, I ate simple, safe meals – meat or fish with a couple of vegetables or a salad but I wanted more…