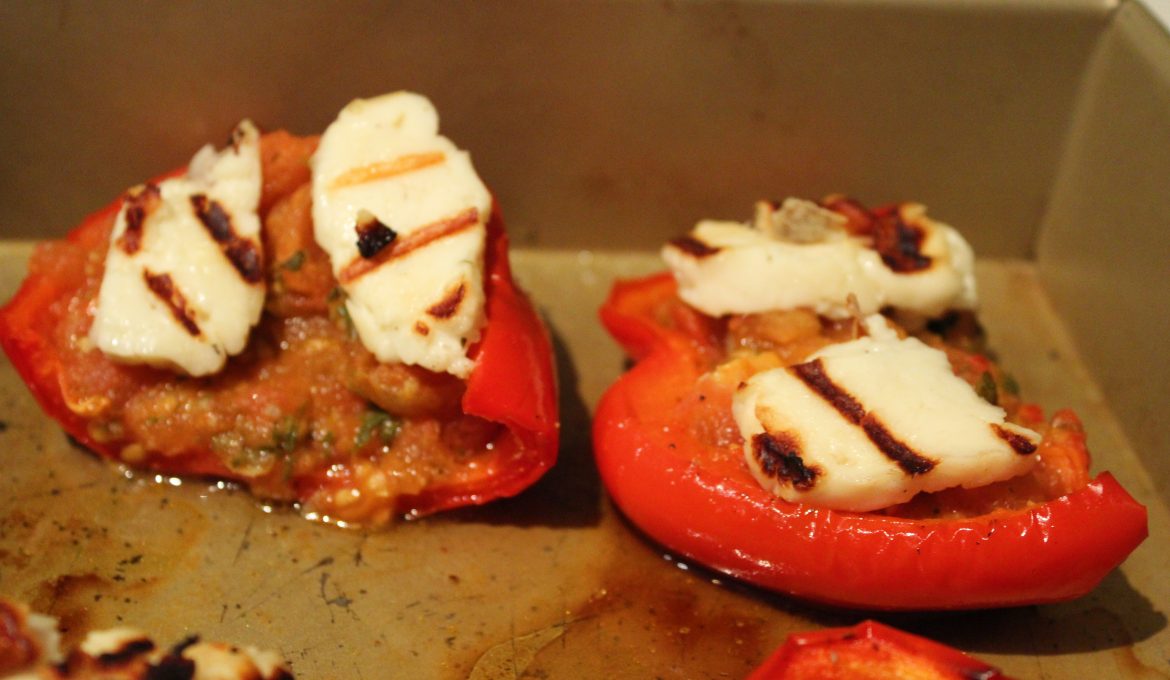 Rather a mouthful of a title but an apt description of the recipe. The red peppers are roasted in the oven and during that time the tomato mixture is cooked on the top of the stove in a skillet and the halloumi cheese is prepared, if possible, on a ridged frying pan which gives the cheese a nice striped look. When all three components are ready it is time to assemble the dish. Spoon the tomato sauce into the red pepper half and top with the griddled halloumi cheese (I can tolerate sheep’s halloumi cheese, if you can’t then omit). Can be a side dish or a vegetarian main.

2 red peppers – halved lengthways, de-seeded and de-membraned, brushed inside and out with olive oil and seasoned with salt and freshly ground black pepper

Place the red peppers in the oven on a baking tray for 3/4 hour until tender .

While peppers are cooking, boil kettle of water and pour over the tomatoes. Leave for a minute and slit skin with a knife (it should curl up and then you know it is ready to peel).

When peeled, dice the tomatoes.

Ten minutes before the peppers are done place seasoned oil in a skillet and when nicely hot add the garlic and cook just until you can smell the garlic.

Add tomatoes and herbs and let simmer until peppers come out of the oven.

At the same time place the slices of halloumi cheese on a hot griddled pan and cook for a short time on each side until you have nice brown griddle marks.

Divide tomato mixture up between the four pepper halves and top with a slice of halloumi.

JOANNA ATKINSON
Gluten & Lactose Free Chef
JO’S HEALTHY KITCHEN came into being when I learned that I was both gluten and lactose intolerant later in life. It came as quite a blow – food and cooking have always been very important to me.

Initially, I ate simple, safe meals – meat or fish with a couple of vegetables or a salad but I wanted more…